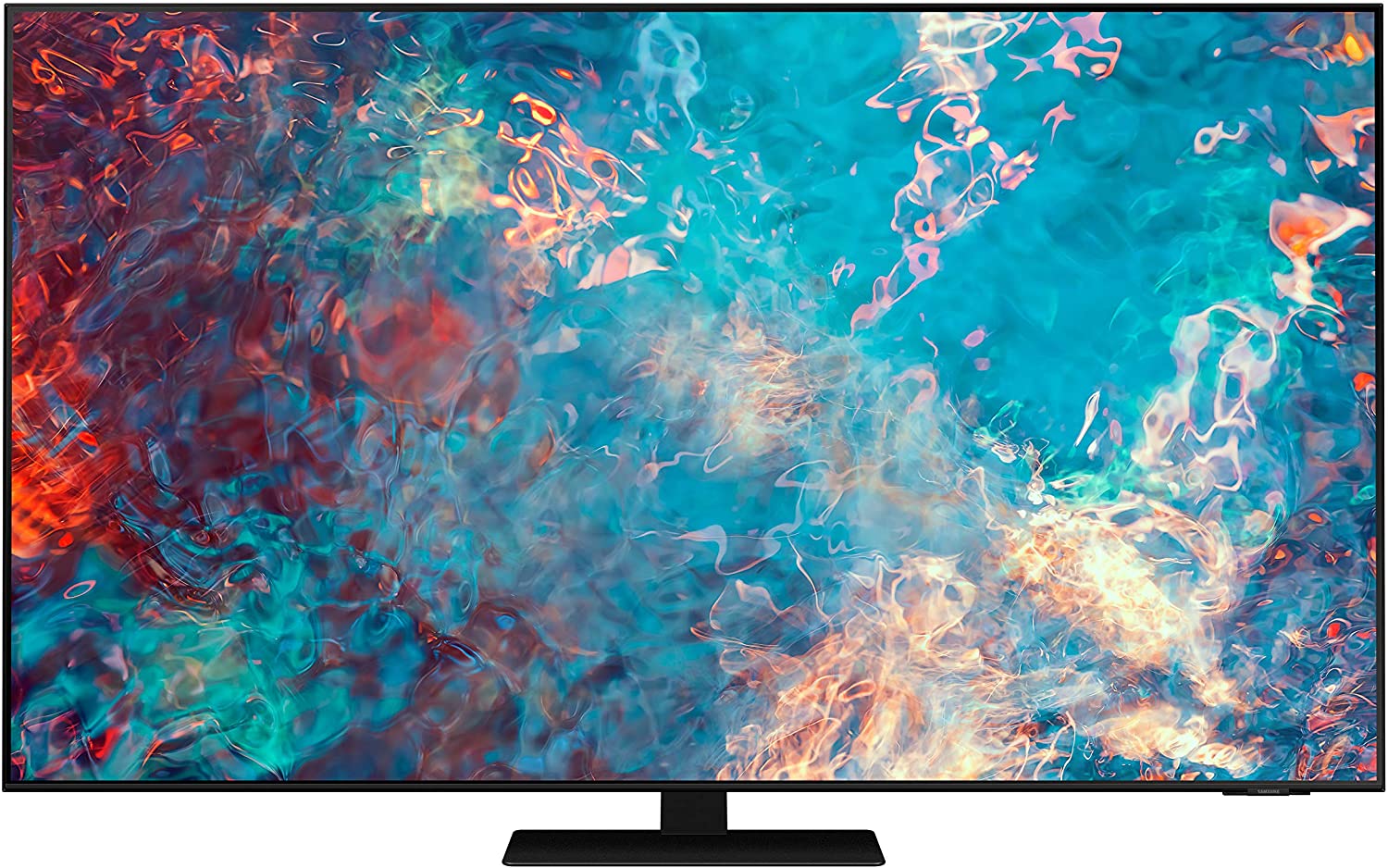 Samsung QN85A review explores the capabilities and features of this 2021 release. Samsung is known for its quality televisions, and the Samsung QN85A is no exception. Available in 55, 65, 75, and 85 inches, this television is large enough for most standard living rooms and gives you a front-row seat to your favorite sports and television shows.

Based on Samsung QN85A reviews, this television promises and delivers on vivid colors, excellent motion enhancement, and intense pictures. As a bonus, this television has a sleek design and can hang flush to your wall or sit elegantly on your TV stand, lending aesthetic charm to your living room. Let’s jump right into our Samsung QN85A review to find out how much value this TV gives you for its price.

According to Samsung QN85A reviews, this television is ideal for mixed usage. It ranks very well among movie buffs, gamers, sports enthusiasts, and anyone who loves HDR movies and gaming. You can also use this television as a PC monitor. This television is very bright and handles reflections well, which makes it ideal for very bright rooms during the day. The local dimming features make it ideal for dark rooms and gaming, allowing you to watch your favorite thrillers at night. HDR content looks beautiful due to the televisions wide color gamut, and you can easily watch sports and play games thanks to the TV’s low input lag and fast response time.

The Samsung QN85A television is a mid-tier QLED television which differs from other QLED televisions due to its mini-LED backlighting and ADS panel. This television features a thin profile and thin bezels, which makes it ideal if you wish to mount it on your living room wall or above your fireplace.

This television is thinner than most other models, which makes it less intrusive and doesn’t stick out when you mount on your walls. If you prefer to place it on a stand, the Samsung QN85A has a metal and plastic stand that is centered but not too wide, leaving enough room for a soundbar. This television has full-array backlights for better contrast and excellent local dimming, thanks to its 576 dimming zones.

The HDR brightness is excellent as well and bright scenes in your favorite shows will pop as intended. As is the case with most ADS panels, this television offers good viewing angles, and you can clearly see everything as you move away from the center. This makes it ideal for living rooms with a wider seating arrangement. As a bonus, this television displays 4K content perfectly and upscales 480p, 720p, and 1080p content.

The principle of mini LEDs is that the television uses much smaller and numerous LEDs to light the panel. This 55-inch screen has 576 dimming zones, ensuring that the backlighting is better controlled and targeted for deeper blacks and more contrast. The Quantum matrix technology in this television reduces picture blooming.

According to Samsung QN85A reviews, the Motion Xcelerator Turbo+ technology allows this television to support 4K content at a refresh rate of 120Hz. Normally, pixels take between 5 and 10 milliseconds to turn off and stop showing an image on the screen.

The residual image on the screen usually looks blurred at the moment of frame change. Motion xcelerator turbo+ technology fixes this issue by inserting a black frame that briefly turns off the television’s backlight for about 3 to 5 milliseconds as the frame changes, reducing the perception of residual images for better motion enhancement.

Object Tracking Sound is Samsung’s built-in audio technology that ensures the sound moves with the action on your screen, allowing you to hear the action exactly where it is happening. This technology uses audio drivers on the top, bottom, and sides of the television to shoot sound from different places.

Object Tracking Sound will analyze your content and input, including games, sports, and movies, and send the sound to the appropriate speaker on your television.  This gives sound a sense of place as it moves across your screen for a more immersive viewing experience.

Quantum HDR is a combination of two technologies, namely Quantum Dot and HDR 24X. HDR 24X ensures excellent color accuracy and contrast ratio for very vivid images. This ensures that the colors on the screen are as close to the colors of the original content as possible. Quantum Dot technology on the other hand features diodes that emit blue light instead of white light, ensuring that the television is brighter and has better contrast.

Samsung QN85A reviews indicate that this television is ideal for anyone who would love hands-free control of their TV. This television is compatible with Alexa, Google Assistant, Bixby, and Apple AirPlay 2 to help you control your television easily. The built-in voice assistants can help you get answers, change channels, change volume, and play your favorite content using just your voice.

Based on the various Samsung QN85A reviews, this television offers good value for money and is the perfect size for a standard living room. Features such as Quantum HDR 24X and Quantum matrix technology ensure vivid pictures for better color reproduction and a richer viewing experience.

The slim and attractive design makes this television a visual treat, and the Object Tracking Sound feature offers crisp sound that moves with the action. Click here to learn more about this television.

Intrusion Review: A Plot Line That Leaves Little to the Imagination

This television is VESA compatible and works with TV brackets that measure 200mm x 200mm. Furthermore, you can purchase a Samsung slim fit wall-mount accessory separately to ensure your television hangs on your wall with very little space between for an elegant appearance.

This television supports most of the popular internet services, including Hulu, Disney+, Vudu, YouTube, Apple TV, Prime Video, and Netflix.