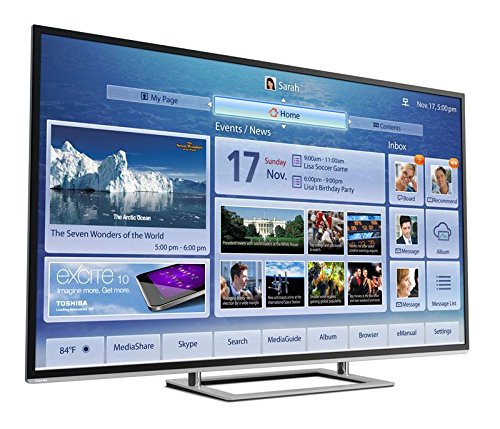 According to Toshiba TV reviews by experts and consumers, Toshiba has put a lot of focus on the quality of pictures and contrast in all its televisions. This has significantly improved the viewing quality, regardless of whether the consumer has a budget LCD television or the more expensive OLED TVs.

Most people lose the remote from time to time, and Toshiba is telling such consumers that it is okay. In fact, the company is saying that this is okay and that consumers do not have to worry as long as they have some of the top-shelf models from the company. With the voice remote with Alexa, users can now change channels and settings on their television by giving Alexa certain commands. They can also use Alexa to launch apps on smart televisions and search for content. This can help increase convenience and reduce frustration when the remote is lost or out of reach.

If you have any content on your smartphone or tablet, such as videos or photos, you can easily share them to your television using this feature. Screen share displays all your mobile phone content on the large television screen, allowing you to take advantage of the TV’s excellent picture quality and superb contrast.

If you are worried about using too much energy or if you would like to reduce your carbon footprint, the Eco-friendly mode is here to help. This feature allows you to monitor your power consumption and set preferences. Using this feature continuously can help consumers reduce their energy consumption considerably.

There are some Toshiba models that have lots of fancy features and specifications, and learning to use all of them can be hard. Toshiba understands this, which is why the television has an integrated manual which is easy to access with the click of a button. This means that the user does not have to sift through tens of pages looking for information on how to operate their television, as all the information is easily accessible on a single screen.

Smart televisions usually have underwhelming sound technology due to their slim size. However, Toshiba has done a lot to improve the onboard sound over the years. Older models have folded speakers that produce a lot more bass and better quality sound than most television sets. Newer models have Dolby audio, which produces the kind of sound you’d expect to get in a movie theater. This makes Toshiba a great television to use when listening to music or watching movies, as the consumer hears all the on-screen action and dialog with better clarity.

If you are not a fan of cable television, Toshiba smart TVs open up a whole new world of entertainment through the smart portal. Consumers can choose to watch a wide range of videos or listen to music and online television. They can also update their social media sites through the social media apps. Individuals who purchase 4 K televisions can also access streaming services from Netflix and YouTube. The smart portal also allows you to get social by making it easier to check or update your social media accounts while you watch television.

The web browser on Toshiba televisions is much better than similar ones in other major brands. Some models even come with a full QWERTY keyboard, making it easy to type and search online. Toshiba also has TV control apps for tablets and smartphones that allow you to control the television using your mobile devices.

The WLAN feature makes it easy for your television to connect to the internet through a wireless connection. The Wireless Local Area Network eliminates the need for unsightly wires while ensuring your television can access the internet from a hotspot somewhere else within your home.

If you love videos, prepare to spend a lot of time in front of your Toshiba 4K television watching the very latest videos from popular sites such as YouTube through the Video on demand feature.

Most Toshiba models come loaded with features that help improve the TVs picture quality. Some screens have edge-lit areas that dim in large swaths for full-array backlights, offering better black-level performance and contrast.

From a design standpoint, Toshiba has really tried to make their televisions stylish and fashionable. That was obvious during out Toshiba TV reviews. Both low-price and high-end televisions have classy touches and subtle styling. Premium TVs have glass-topped swivel stands and metallic edging for an elegant look, while others have a very gentle curve along the bottom. Most of their smart televisions are also very slim with a slightly thicker bottom. The standard remote controls are also sleek yet easy to use.

Toshiba is a mid-range brand in terms of price, but most televisions are still pretty affordable. Fortunately, the quality is quite decent, and the various televisions are jam-packed with useful features that enhance your entertainment viewing. Let’s wrap up our Toshiba TV reviews.

[Read what others are saying about Toshiba Televisions]

If you are already familiar with Smart televisions but do not want to fork out too much money for the top-shelf brands, then Toshiba is a nice middle-range product you can purchase. It has quite a few notable features and a sleek design that contributes to its high-end look. Go through the reviews of individual brands to determine which one will suit you best. Read what Toshiba TV owners have to say.