Should My Child Have a TV in Their Room? - TV Review Land Skip to content 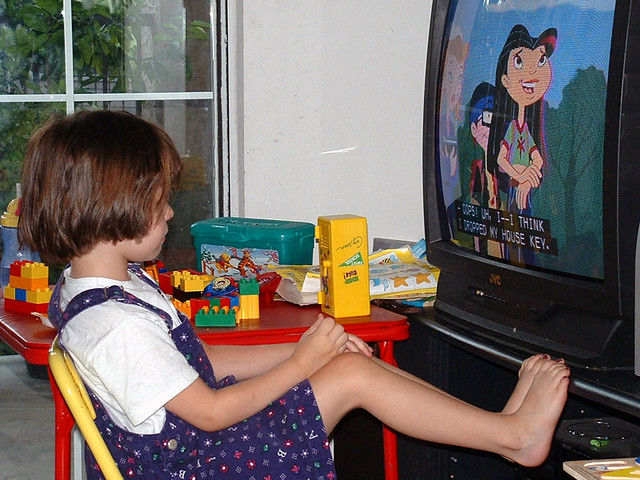 Does the answer follow a simple ‘yes or no’ format or is there more nuance to this issue? Find out by exploring different studies that address the topic of televisions in children’s rooms.

Should my child have a TV in their room? What the experts say

As televisions become lighter, more compact and more affordable they also become viable options for spaces that were previously TV-free. This is an evolving trend that draws the attention of scientists, psychologists and professionals from many other fields. It figures that researchers from different disciplines continue to conduct studies to measure the effects of TV sets in children’s rooms.

What follows are examples of such studies, along with their outcomes and conclusions.

1. The effect of TV screens in children’s sleeping environments and sleeping patterns: A study published by the American Academy of Pediatrics

This study shows the link between the presence of televisions in children’s rooms and sleeping patterns. It also forms a link between secondary effects like performance in school, behavior and the child’s overall health.

The study took place under the umbrella of the Massachusetts Childhood Obesity Research Demonstration Study, a project of the Harvard School of Public Health. Over the course of 2012 and 2013, researchers collected data from 2,048 kids in fourth and seventh grade.

The participants yielded data that detailed:

The data from the study shows that on average, children who have TVs in their rooms go to bed 18 minutes later than those who don’t. Those with smaller devices went to sleep 20 minutes later, compared to kids with no screens in their sleeping environments.

2. The knock-on effect of televisions in children’s rooms

A second, much larger study collected data from 4700 subjects from the U.S. and Singapore. The participants submitted data for durations that ranged from six months to two years. The study tracked the sleeping patterns of children with televisions in their rooms and those of children whose rooms were screen-free zones.

The study finds that children with TV sets in their rooms are more likely to:

In addition, the study finds that it’s harder for parents to keep tabs on the kind of content a child consumes when they have a TV in their room. Feedback from the participants of the study also points to the fact that children will likely use the TV to play games or watch TV shows, rather than for educational purposes.

Is a TV in a kid’s room ever a good idea?

Like many things in existence, TV has its benefits. It can also cause harm, much like a tool or medication. This means that for TV to have a positive (or non-negative) impact on a child, parents need to regulate its use.

As an example, many smart TVs have interfaces that allow for parental control via the home Wi-Fi network. This could allow parents to limit screen time by disabling the TV with the help of a timer. Most smart devices also have features that allow parents to block or whitelist certain kinds of content.

If the TV in your child’s room allows you to control the TV wherever you are, then it can actually be beneficial, both in terms of entertainment, edutainment and the development of new skills. The key is to create and enforce a set of non-negotiable rules.

At what age should a child get a TV in their room?

Let’s start at the beginning, at age zero. Babies and toddlers don’t need television sets in their rooms. At so young an age, TV does not provide the emotional, physical, mental and verbal stimulation that a child needs. Only human interaction will help infants and toddlers to develop the emotional, cognitive and verbal skills that they need for their development. Does the same rule hold when the child gets older?

Even at this age, children need to explore their surroundings, use their imagination, get into scrapes and get themselves out of scrapes. They need to play, make friends and resolve conflicts with other kids their age. At age four, a child should also be able to read at some level.

At this age, you should keep your child engaged in the real world so you can continue to discover their personality and innate talents. As a parent, you should then direct the child’s energy towards activities and hobbies that contribute to the growth of a well-rounded kid.

If a child gains unfettered access to a TV at ages four to eight, the exposure will numb their mind in one way or another. The child may have a hard time concentrating in class, which operates in real-time. Reason being that TV offers fast-paced, constantly entertaining content that doesn’t resemble real-life time. Too much TV may also hobble the child’s creativity and initiative.

If you have a child that falls within this age range, you may want to hold off on a TV for a while longer. Or you could find a super-smart TV – like those made by Samsung – that you can control from the other side of the house, or from outside the home.

In today’s world, older kids need computer access to perform basic tasks like homework and school projects. So, does a laptop in the bedroom have the same effect as a TV?

It could. That said the small screen of a laptop doesn’t lend itself to the immersive experience that larger screens offer. Video games work better with a console and a fairly large screen. So do movies and TV series. You could stick to a laptop, or buy a smart TV that you can control and monitor no matter where you are.

3. Ages thirteen and above

Hopefully, you’ve established clear boundaries by the time a child goes into their teenage years. If you can enforce screen time limits and other basic rules, then maybe you can allow the child a TV. Still, many parents opt to buy a computer instead. Again, it is all about enforcing limits and boundaries, whichever route you choose to go.

Food for thought: Even adults should limit their screen time

Too much TV is bad for everybody, no matter how old they are. As you think about the amount of TV your child watches, take the opportunity to reduce the amount of time that you spend looking at screens. You’ll be healthier because of it, and it’ll set a great example for your child.

A TV can be a great learning tool, but it’s a poor substitute for a babysitter, friend or bedtime routine

To answer the question we started with, ‘Should my child have a TV in their room?’ The answer doesn’t come in a simple ‘yes’ or ‘no’ format. It’s more along the lines of ‘it depends’.

For one, it depends on the age of the child. TV provides zero benefits to babies and toddlers, meaning that the TV should never be a primary tool to occupy and manage young children. TV babysitters hurt more than they help.

Also, take care to create bedtime routines that have nothing to do with the TV. This concept should hold no matter the age of a child. It should hold for you as well. In addition, avoid granting unlimited TV access to older kids. This could mean no TV in the bedroom, or a smart TV that you can control through the home Wi-Fi network or your smartphone.

Most importantly, make it a point to encourage your kids to do fun, interactive stuff that has nothing to do with any electronic devices.