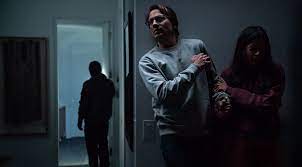 Our Intrusion review dives right into Netflix’s recent release. Netflix has this plan where they release a new movie every week, which is ambitious. One of the recent films from this year-long plan is Intrusion; a domestic thriller that launches itself off two home-invasions.

This movie straddles several genres, making it a strange animal that’s hard to put in a single box. In one way, the movie has the slow buildup and predictability of your made-for-TV mystery. Intrusion also gives off the ‘cautionary tale’ vibes we expect from your typical lifetime movie. You know, the type that makes us wonder how well we really know the person we love.

The opening scenes of intrusion are all hope and new beginnings. They show the perfect couple starting a new life in a new house, nestled in the perfect little town. It’s a good backdrop for a mystery thriller.

Logan Marshall-Green is one of those familiar faces we see in films like Spider Man-Homecoming. In today’s review, he’s Henry: A solid and supportive husband to Meera. Henry’s an architect, by the way. It’s vital that you remember.

Our leads team up to play a couple battling breast cancer to make it through the other side. Meera is in remission, and her husband has been her rock all through the ordeal. He takes it a step further, designing and overseeing the construction of their giant home in a small rural town. So this picture-perfect couple gives up hectic city living to catch their breath in the country.

It turns out that country life isn’t as uneventful as it sounds. It starts with a burglary where the thieves take nothing but Meera and Henry’s computer stuff. The couple is shaken but safe, seeing as they were out on a date as the burglary happened.

The second burglary finds the couple at home, but Henry protects his wife and shoots two of the assailants. One man dies on the spot, and another ends up in a hospital, in critical condition.

Intrusion Review: Nothing to see here?

Two home invasions in quick succession sound worrisome, and these don’t seem like your typical robberies. You have time to figure it out, though, because there’s a lot more of the movie to get through. Enter the breadcrumbs.

The first thing we see is that Meera and the home invaders were equally surprised by Henry’s gun. Why would Henry fail to mention something as important as a gun in the home? Also, Henry seems totally fine, considering a man is dead by his hand.

The movie encourages you to side-eye Henry by playing ominous music whenever he appears on-screen. There’s also something about the way he carries himself that won’t sit right with you.

First an omission, then an outright lie

Meera starts to see a new side to Henry, and she worries. However, this is the man who stood by her through breast cancer. Besides, we all react to traumatic situations differently, which would explain Henry’s need for a gun after the first break-in. His shock could also come off as a casual attitude toward death, right?

Except that Meera catches her solid, dependable Henry in a lie. It’s a few days after the home invasion, and Henry goes out to run an errand. He tells Meera that he’s off to the store and forgets his wallet on his way out. The good wife follows her man to reunite him with his wallet, but Henry’s not headed to the store.

Suddenly Meera gets into a scary but minor accident, and she loses track of Henry. In other news, the second guy that Henry shot dies that same night. Also, there’s a missing girl in this small, previously safe town.

The rest of the movie is you finding out if there’s a good reason why the ideal couple suffers two violent home invasions. You learn things from Meera’s point of view as she stumbles across the lives of the dead men that broke into her home.

Now that her car is wrecked, Meera borrows Henry’s to get around. Her access to this car jerks the plot forward.  Like you, Meera is getting a nagging feeling about her husband, and she uses his car GPS to track his past movements.

Each clue she finds leads to more clues, and soon a scary tapestry starts to take shape. Even as tension mounts, the couple continues to settle into their new home. They go to work, they plan a housewarming party, and they doubt each other. Normal couple stuff.

For some reason, our heroine’s search for truth hits the dumbest snags. A camera breaks, and Meera forgets that it could hold vital evidence. She starts trusting her husband again, and she tries to give away said vital evidence.

You get a nagging feeling that this is a plot device to keep the movie from ending too soon.

Execution: The home invasion as a tool

Early on, a pair of home invasions give us the clearest warning that something is wrong. The second home invasion has to be the most unpredictable part of the movie. For a few fantastic minutes, it takes up all the space in your mind. Having such an intense scene early in the story is disorienting, in a good way.

The home invasions also turn a luxurious (if ugly) house into a space that feels unsafe. It’s almost like the house develops an aura that puts you on edge, like an extension of Henry’s personality.

Meera finally (and accidentally) watches the vital clue that explains everything. She makes a few more shocking discoveries in the middle of hosting a housewarming party with Henry. Like a good thriller, our detective’s discoveries come with the requisite side dish of danger.

For the third time, this home that’s supposed to be Meera’s fresh start is looking a lot like a death trap. How many times will our heroine beat death?

Intrusion lacks the surprises and plot twists we expect from cult classics and blockbuster thrillers. Still, it will keep you occupied for an hour and a half. That’s quite the achievement considering that you’ll likely see the ending from a mile away.