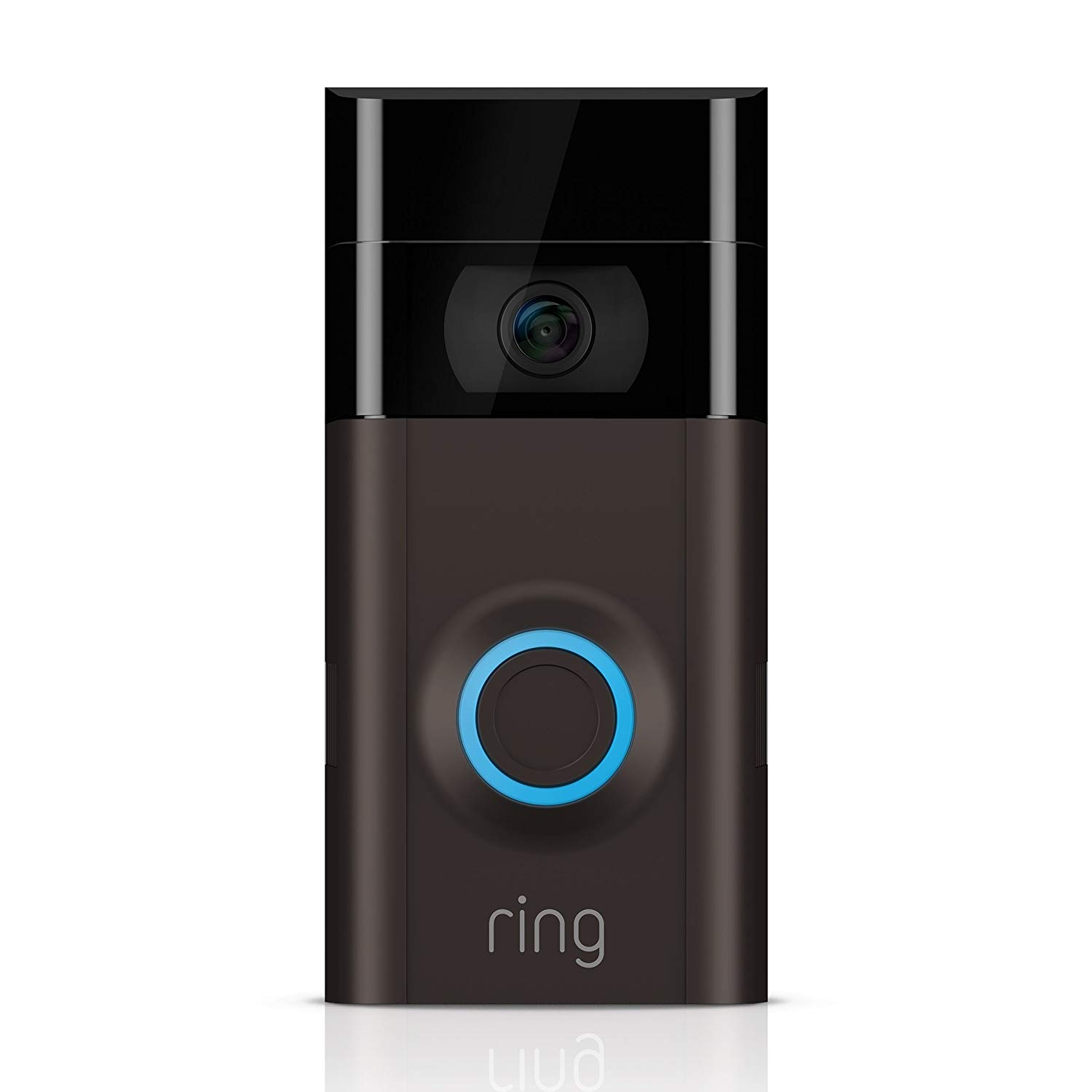 The best wireless doorbell camera in the market should put your mind at ease as far as home security is concerned. It should also have great hardware and added features that allow you to keep an eye on your home wherever you are.

Amazon’s Ring Video Doorbell 2 checks these two boxes. Before diving into the different qualities of this home security system, check out a brief explainer of how video doorbells operate.

Search for the best wireless doorbell camera: The basics

If someone approaches your door, the motion detector and camera in your doorbell camera will send video and audio through your WiFi network and onto the cloud. Wherever you are, you will get a notification as well as the audio and video feed from the doorbell.

Your audio response to the person at your door will travel in the reverse: From your phone to the cloud, (or) to your home Wi-Fi network and finally, to the speaker inside the video doorbell.

The two-way audio channel allows you to talk to a delivery guy, or to warn off some random person skulking around your home. The doorbell camera can also store transmitted footage via your home network. This is generally how Ring Video Doorbell 2 works. A closer look at the device can show you what else the device has to offer.

There’s a lot of stuff that is in the package that holds the Ring Doorbell 2. You have the video doorbell itself, two faceplates, a screwdriver, a drill bit, screws and their washers. There is also a pair of wedges to help position the doorbell, a small spirit level, wiring extensions, lug nuts for electrical wires and a USB charging cable.

You will also find a set of vague instructions to ‘help’ you through installation. They won’t be much help, so Install the app and use the instructions from there instead. 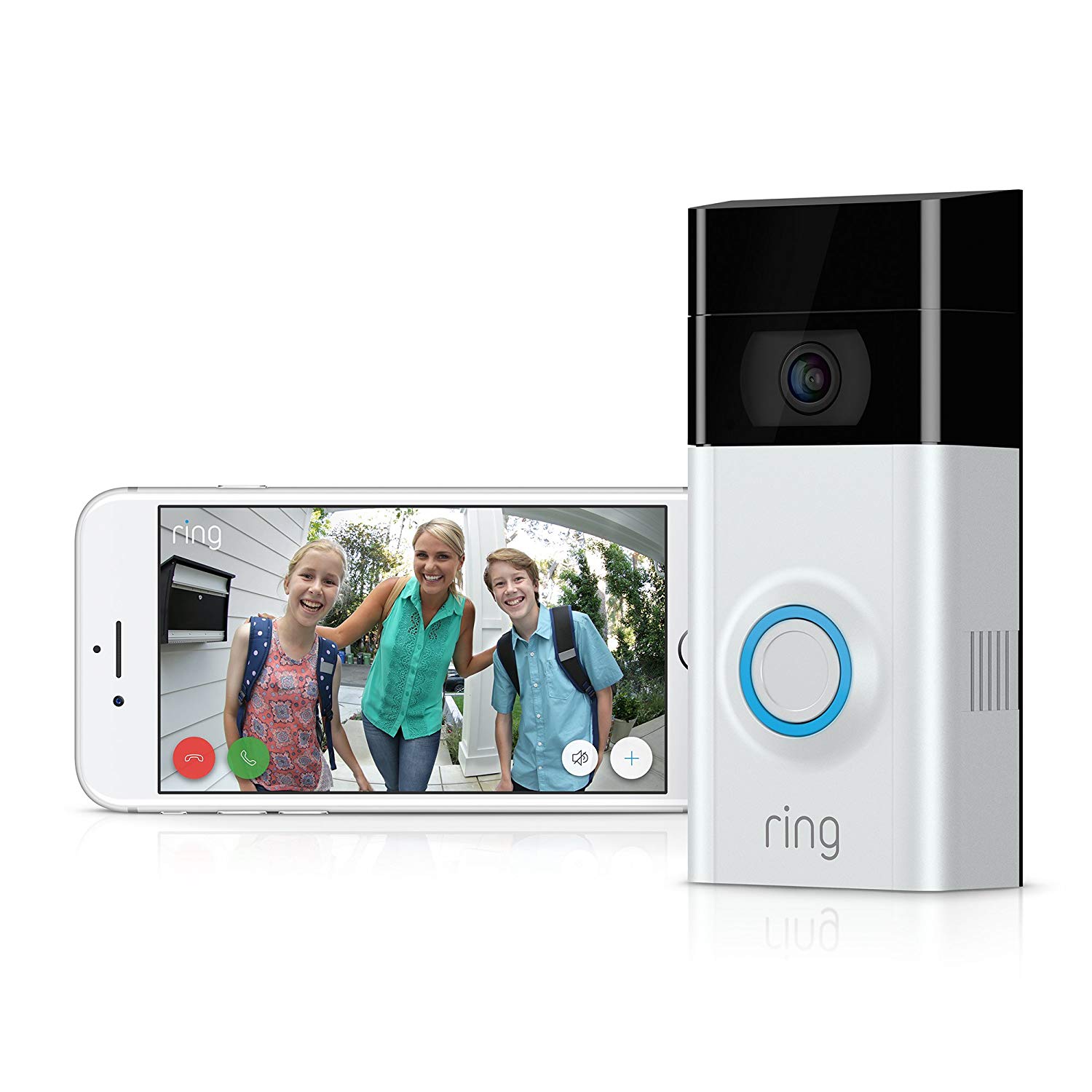 The Ring video doorbell is five inches high, two and a half inches wide and an inch thick. The uppermost portion of the device has a glossy black cover with an opening for the camera. You’ll need to fit one of the two faceplates on the lower part of the doorbell. One plate is silver while the other is matte black.

The edges of both the upper and lower covers are rounded, giving the device a sleek, minimalist aesthetic. At the center of the doorbell is a backlit button that people can ring. It takes up the role of a regular doorbell.

[Read what others are saying about this wireless doorbell camera]

The designers of the Ring have upgraded the image resolution of the camera from 720 to 1080p. As a result, the video that comes through to your phone is detailed and well defined, making it easy to identify facial features, even at some distance.

The camera also works a lot better in night mode now, thanks to a combination of RGB and infrared lenses. This allows the camera to record clear pictures and defined facial features even in dim lighting.

The motion detector of the original Ring has a reputation for having a hair-trigger. Many customer reviews reported motion activation from unexpected things like passing cars. With the Ring 2, the manufacturers have repositioned the sensors, such that they only pick up movement at and around your door.

This improvement ensures that you get accurate notifications once the doorbell calibrates itself.

The original Ring video doorbell was in the running for the best wireless doorbell in the market. Its integrated battery knocked it off the number one spot. So it’s a good thing that the battery in the Ring Doorbell 2 is removable.

Now there’s no need for electrical wiring. There’s also no need to unmount the camera and charge it indoors. You only need to swap the drained battery with a fully charged spare. The battery is pretty easy to remove and replace once you learn to detach the faceplate.

The Ring video doorbell comes with a Wi-Fi adapter that is moderately powerful. That said, the doorbell still needs to be in the range of a wireless router in order to connect with the cloud. This means that the effectiveness of the device depends on the layout of your home network.

There is a simpler way to ensure an optimal Wi-Fi signal to and from the doorbell. You can buy a Chime Pro, which doubles as a Wi-Fi repeater and as an indoor chime for the doorbell. Better still, once you set up the Chime Pro on your home network, it will take over and make the software installation of the doorbell super easy.

Many consumers would consider the best wireless doorbell camera to have an allowance for local storage. The Ring Camera Doorbell 2 is not that product. This device depends on the cloud to transmit the goings-on at your door in real-time.

The business model of the product is to create a demand for subscription-based services. One guess on what those services are: That’s right, stored footage. Whether or not this setup works for you depends on your personal views.

The Ring video doorbell 2 also comes with some new features that are so useful that you’ll start to wonder how people put up with the original Ring doorbell. For example:

The Ring video doorbell 2 is everything that an upgrade should be. It has features that enhance both the overall user experience and the security of your home. All the incremental improvements that the designers at Ring make to their devices are evident in the Ring doorbell 2.

It’s safe to say that the Ring Video Doorbell 2 is one of the best wireless doorbell cameras in the market. Read more about this device.

2 thoughts on “Could The Best Wireless Doorbell Camera Right Now Be The Ring Video Doorbell 2?”