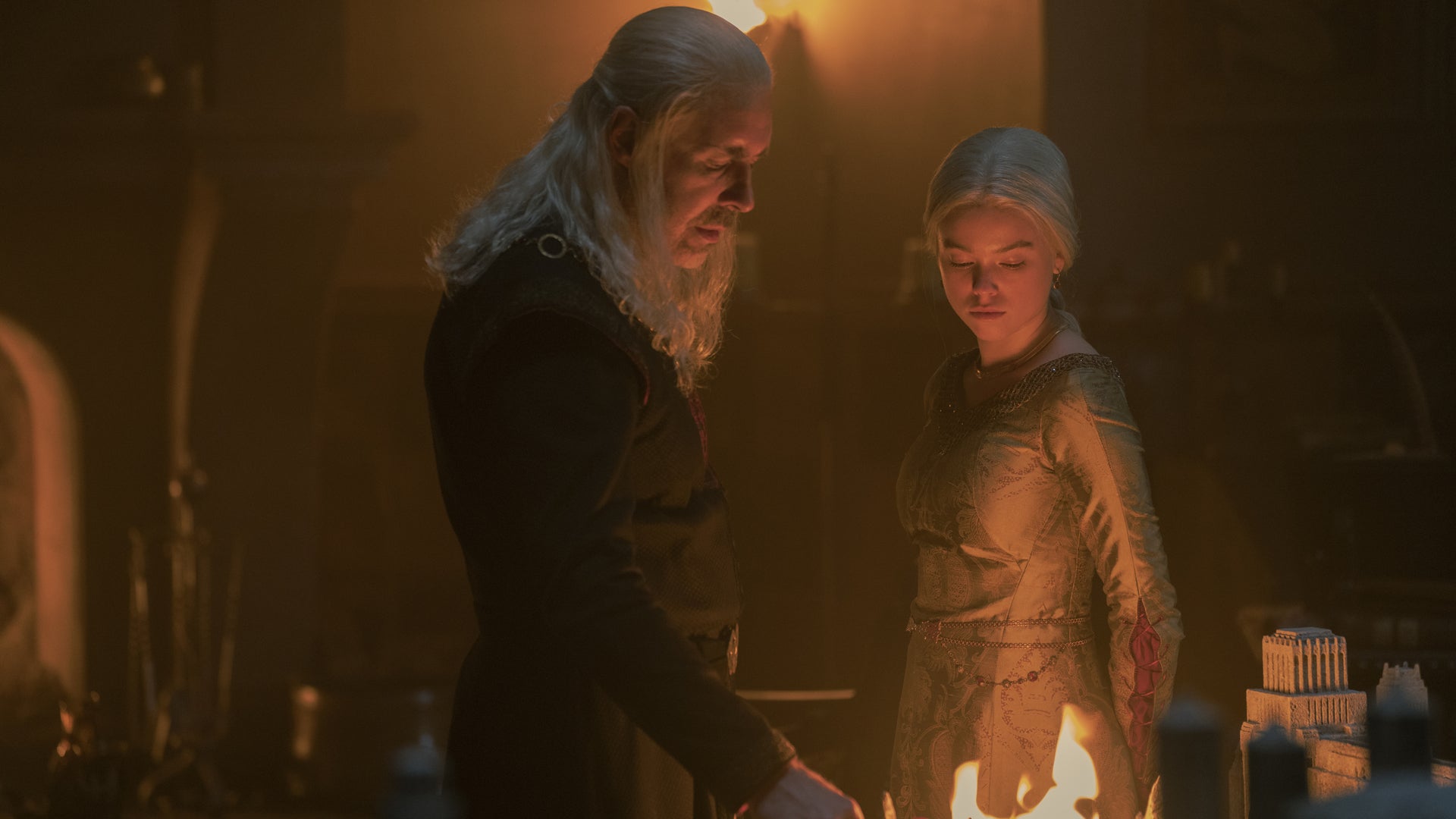 Let’s use this House of the Dragon episode 4 recap review to check the political temperature of King’s landing.

The fourth episode of this Game of Thrones prequel resumes the measured pace that defines much of the series. You get another administrative episode that drives the storyline forward at surprising speed. You have to hand it to the writers, who continue to channel the chameleon and other ambush predators. The plotline looks like it’s just lying there, and then it strikes in a split second.

House of the Dragon episode 4 review: The brothers quash their beef

A special mention goes to the starting montage and its rivulets of blood. Whether it be bloodlines or bloodshed, the starting credits of the series have an effect when you fixate on them. For many viewers, the visuals are not exactly pleasant, but the aesthetic goes nicely with the opening scenes of the fourth episode.

Let’s pause and take in Rhaenyra’s necklace as she suffers through a parade of suitors. It’s the same Valerian heirloom that her uncle Viserys gifted her back in the series premiere. Now we skip to the part where the event descends into a bloody sword fight. Princess Rhaenyra has had enough, and she ends her husband-hunting tour. As she nears King’s landing, her ship is buzzed by Caraxes, the dragon. The dragon’s presence signals that uncle Daemon is in town, and our princess is thrilled.

King of the Narrow Sea

Now we arrive at the first major plot point of House of the Dragon episode 4. Daemon’s victory over the Crabfeeder’s army sees him become King of the Narrow Sea. Wearing a crown of bone and teeth, our prince-king makes a dramatic appearance before the iron throne.

He presents Viserys with the battle axe of prince Drahar the Crabfeeder. The axe should be right at home with all the other pointy things on the iron throne. Lastly, Daemon offers his crown to Viserys, and the brothers embrace. Knowing Daemon, you should place a bet on how long the brotherly affection will last.

Raunch as a plot device

The third episode of House of the Dragon (HotD ) drives the storyline within the context of a birthday celebration. In the fourth episode, the showrunners use the medium of sex to flesh out our characters.

The princess is glad to have her fun uncle around, if only for candid conversations with someone who understands her. During one of their little talks, Rhaenyra shares her reservations about marriage. She sees the institution as a prison that carries the very real risk of death by childbirth.

Daemon tells his niece that marriage is an arrangement she can tailor to her own terms. He also advises Rhaenyra that living in fear is not living at all. To this, the princess replies that she wants to live in solitude, not fear. So good uncle that he is, prince Daemon takes it upon himself to give Rhaenyra a more…practical lesson on life.

Later that day, Rhaenyra retires for the night, only to find a rucksack with peasants’ clothes and a map. She uses the map to meet up with her fun uncle, who takes her to the underbelly of King’s landing. Unlike the somber spaces of the Red Keep, the Flea Bottom is teeming with life. An acrobat is walking a tightrope, a guy is doing cool things with fire, and vendors of every stripe are plying their wares.

A spot of incest?

Eventually, uncle and niece end up in a brothel, where Daemon watches Rhaenyra’s reaction like a hawk. The girl takes in the sights, and the night’s euphoria soon sees her in the passionate embrace of her uncle. If you’ve been watching the show, you saw this coming from the moment Daemon placed the Valerian necklace around Rhaenyra’s neck.

Anyhow, Daemon catches himself before going all in, as it were. He leaves Rhaenera with her pants around her legs. Also, the princess loses her disguise when the cap that hid her Targaryen hair slips off. Our girl returns home, where she proceeds to seduce her bodyguard.

We’re keeping it in the family over here, so we look in on Rhaenyra’s father and her stepmother. Viserys and Alicent provide a sharp contrast to the passionate escapades of the prince and princess. We see lady Alicent stare lifelessly at the ceiling as the King has his way with her. This scene manages to be way more uncomfortable than the mass of writhing bodies at the brothel.

It turns out that someone clocked Rhaenyra and Viserys when they exposed their white-blonde heads. Word soon gets back to the King’s hand, who quickly relays the information to Viserys. Of course, Otto makes it seem like Daemon took Rhaenyra’s virginity.

Viserys is understandably upset, and he banishes his brother once more. But not before Daemon asks to wed Rhaenyra. It’s worth noting that the troublemaker fails to deny the charges leveled against him.

Flea Bottom provides a bawdy, chaotic backdrop for some important pieces of information. An irreverent mummer’s farce lets the princess know that public opinion is against her claim to the throne. The experience also leaves Rhaenyra with a more ‘practical’ viewpoint of her situation. These events shape the outcome of another difficult father-daughter talk.

Viserys confronts his daughter about her escapade in the city’s places of ill repute. She protests her innocence, but King Dad directs that Rhaenyra marry immediately. The princess agrees, but on one condition: That Viserys remove Otto Hightower from the position of King’s Hand.

As the King’s hand, Otto Hightower has a duty to inform his King of the secret goings-on of the realm. So imagine the irony of Otto losing his position in the line of duty.

Viserys finally sees Otto’s hand in his marriage to Alicent. The King wonders how far his second-in-command would go to see Alicent’s son on the throne. Viserys also notes that Alicent was a huge comfort after losing his wife and newborn son. With these sentiments, king Viserys Targaryen strips Ser Hightower of his position as King’s Hand. The King expresses his deepest gratitude to the man who taught him how to become a king.

Lord Corlys Velaryon makes his own way in the world, this time by allying with the Free Cities. He achieves this feat by wedding his daughter to a powerful sea lord in Bravos. The power move catches the attention of King Viserys, who moves to curry favor with House Velaryon.

Princess Rhaenyra is to wed Lord Laenor Velaryon, who happens to be Corlys’ son and the dragon rider from the previous episode. Episode four ends with Viserys sending a goblet of contraceptive tea to Rhaenyra. With each passing episode, we discover that Viserys perceives much more than he lets on.

Excellent execution and a surprise ending

House of the Dragon is proving to be a quality production on most counts. The raunchy scenes are tasteful to the point of being, well, artistic. In a vast improvement, the writers and showrunners of HotD avoid the long-winded sex positions of Game of Thrones fame. Instead, the creative team tells their story through the main character’s actions, reactions, and development.

Audiences who keep up with the book version of House of the Dragon may be reeling from the exit of Otto Hightower. The little time leaps and plotline jumps are just two of the many charms of the series.

House of the Dragon Episode 3 Recap-Review: This Is Fun to Watch