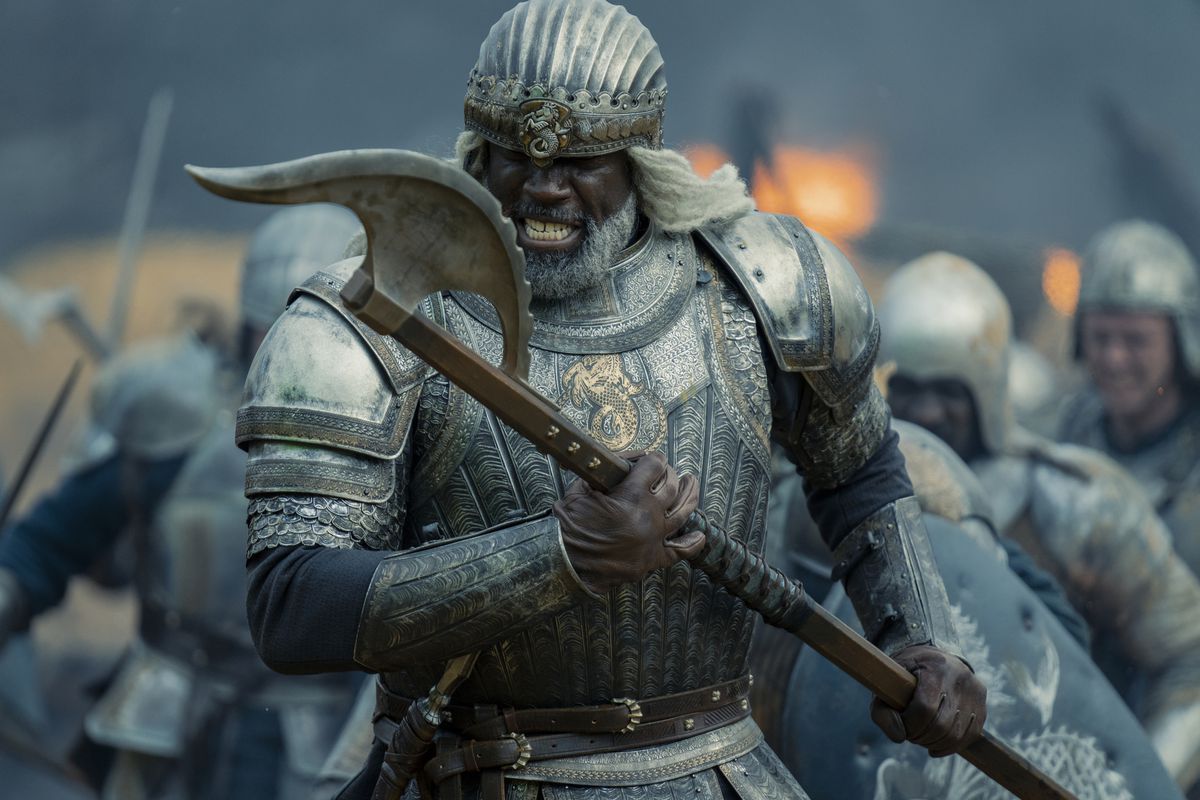 This House of the Dragon episode 3 review goes out to the ones who love a good battle sequence. The third episode is a welcome change of pace and a nice contrast to the measured storytelling that the series favors.

Episode two does the clerical work of showing us the different interests with designs on the throne. So far, we see scheming that blossoms into power moves. We also see new alliances rise from the ashes of disappointment.

Amid the trouble within and without the realm, the marriage of King Viserys and Lady Alicent Hightower unfolds in something akin to bliss. Still, we start this review with the trouble that troubles the shipping routes of Westeros.

House of the Dragon episode 3 review: A proxy war by any other name

In no uncertain terms, the crown states that Westeros is not at war with the Triarchy. There’s nothing to see here, just a little squabble between two princes of Westeros and a prince of the free cities. This brings us to the opening scenes of House of the Dragons episode three.

It’s dark on a beach in the Stepstones, but visibility is good, despite the clouds of smoke that obscure the night sky. A burning standard with a large dragon blows in the wind, and the skeleton of a large ship burns behind it. Small fires litter the beach as the Crabfeeder’s ragged army stores the spoils from their latest shipwreck.

On the ground lies a sailor from lord Velaryon’s fleet. The man threatens brimstone and dragon fire as the Crabfeeder quietly nails the sailor’s hand to a wooden post. Our sailor’s threats are true, and air support soon turns up to burn more stuff. Too bad the dragon crushes the poor sailor underfoot as it lands.

Being seasoned guerilla fighters, the Crabfeeder’s men take cover in nearby caves, where dragon fire can’t reach them. From the safety of their nooks, Drahar Crabfeeder’s men rain fiery arrows on prince Daemon and his dragon. One of the arrows finds its mark through a seam in Daemon’s armor. The pain seems to transmit to Daemon’s dragon, and the beast beats a hasty retreat back to base.

The visuals are as stunning as they are disturbing, making them the perfect segue to a toddler’s birthday party.

The second of his name

Festivities are in full swing on Aegon’s second name day, and King Viserys is taken with his young son. The marriage of Viserys and the heavily pregnant Alicent is proving fruitful.

Rhaenyra is not in a festive mood, and she hides away to avoid the birthday crowd. Her father can’t find her, and it’s up to Alicent to find Rhaenyra and push our princess to participate in the celebrations. By order of King Viserys, of course.

Against her will, the princess is dragged to the hunt that Viserys declares in honor of his young son. She has to travel to the hunting grounds in the same carriage as her father, her former best friend, and their son. The conversation that unfolds gives you a peek into the family’s tense dynamic.

Storytelling at a celebration

George R.R. Martin often advances his plotlines with excellent dialogue and streams of consciousness from POV characters. Sometimes he becomes the omniscient narrator to drive the story forward in third person.

House of the Dragons uses the first and second devices to show us the machinations happening behind the scenes. For starters, we see Otto Hightower proceed to the second phase of his plan. He means to replace princess Rhaenyra with Aegon II, otherwise known as his toddler grandson.

As always, Otto’s most potent asset is his daughter Alicent, who has succeeded in producing a male heir for Viserys. Alicent proves adept at bending the king’s ear and steering his heart. Would Otto’s end game be to control the young boy as Regent? Who knows at this point?

Talk of marriage and a hard conversation

The next set of conversations centers on Rhaenyra, as an arrogant Lannister tries to woo the princess. He tries to butter up Viserys and the princess, but his efforts are woefully clumsy. There’s something about the Lannister’s manner, or as the king puts it, “Even his pride has pride.”

Marriage is the thorny issue that triggers an honest conversation between father and daughter. We see how much Rhaenyra wants the throne and her (genuine) fear of losing her place to a male heir. Their conversation reveals the hurt and betrayal that Viserys’ choice of wife is causing the princess.

We also find out that Viserys has no plans of replacing Rhaenyra with her half-brother. He wants Rhaenyra to marry to strengthen her claim to the throne. This revelation is surprising for a man who watched his wife undergo a deadly, medieval C-section. You’d think the king would move to enthrone a male heir at all costs, but Viserys is a hard man to understand.

He’s naïve, insightful, distracted, and watchful, all at the same time, depending on the prevailing weather patterns.

A symbol, a forest jaunt, and a maybe-prophecy

The white stag is an ancient symbol of royalty in Westeros, making the dragon sigil a ‘recent’ upstart. Otto Hightower announces the sighting of one such stag, a most auspicious sign on young prince Aegon’s birthday.

Yet it is princess Rhaenyra who attends a little meeting with the stag on a beautiful morning. The stag approaches her, and she prevents her bodyguard from killing it. If the breathtaking cinematography is anything to go by, the scene looks a lot like an otherworldly coronation.

Rhaenyra heads back to camp and makes the grand entrance of a runaway princess returning from a forest adventure. It helps that she’s covered in the blood of the wild boar that tried to murder her the night before. You can see from the looks she’s getting that the princess is earning street cred. So is prince Daemon, as if his scary reputation needs any more burnishing.

Back at the Stepstones

This brings the audience back to the years-long scuffle at the Stepstones. Lady Alicent convinces her husband to send aid to Daemon and the Velaryon navy. The aid is preceded by a brotherly letter from the king to the prince, but there are no fuzzy feelings to be had here.

Prince Daemon has a streak of that famous Targaryen madness, which comes through in this scene. He bludgeons the messenger because he will not suffer his brother to share in his ‘glory.’

In a fit of temper, Daemon goes behind enemy lines waving a white flag, and he kneels, offering his sword in surrender. The Crabfeeder marksmen are cautious and train their arrows on the kneeling prince. Next, a few of Drahar Crabfeeder’s men approach Daemon. The prince deftly shifts the harmless sword into his fighting hand and kills several of Drahar’s men.

Daemon is executing a suicidal plan to draw the Crabfeeder and his men out in the open. The plan works because the prince is on foot, and there’s nary a dragon in sight. Beautiful battle choreography sees Daemon Targaryen dodge a hail of arrows as he runs a deadly gauntlet. His little stunt annoys the Triarchy forces, and they swarm the beach to engage the Velaryon army.

Perhaps in the Crabfeeder’s mind, if Daemon is on foot, his dragon must be out of commission. It’s a good guess, but it turns out that the son of Corlys Velaryon is a dragon rider, as he shows up to the battlefield riding his dragon named Seasmoke. Here’s an interesting fun fact: Seasmoke is an offspring of Rhaena Targaryen’s dragon Dreamfire, making him the older brother of Drogon, Rhaegal, and Viserion. He makes quick work of the Crabfeeder’s men, leaving Daemon to pursue and kill prince Drahar.

Rhaenyra and her uncle Daemon promise to be formidable opponents for Otto Hightower. Also, House Velaryon is back in the game with a dragon rider who seems a good match for the current heir to the throne. The King’s hand has a lot of scheming to do if he’s to put his grandson on the throne.

It’s great to see the showrunners’ handiwork come through like it did in this episode. A great script and enjoyable battle sequences infuse episode three with the soaring storytelling that we love from George R.R. Martin.

We bid farewell to the Crabfeeder, his excellent makeup, and his eerie presence. The character is a lesson of how to command a scene without saying a single word.