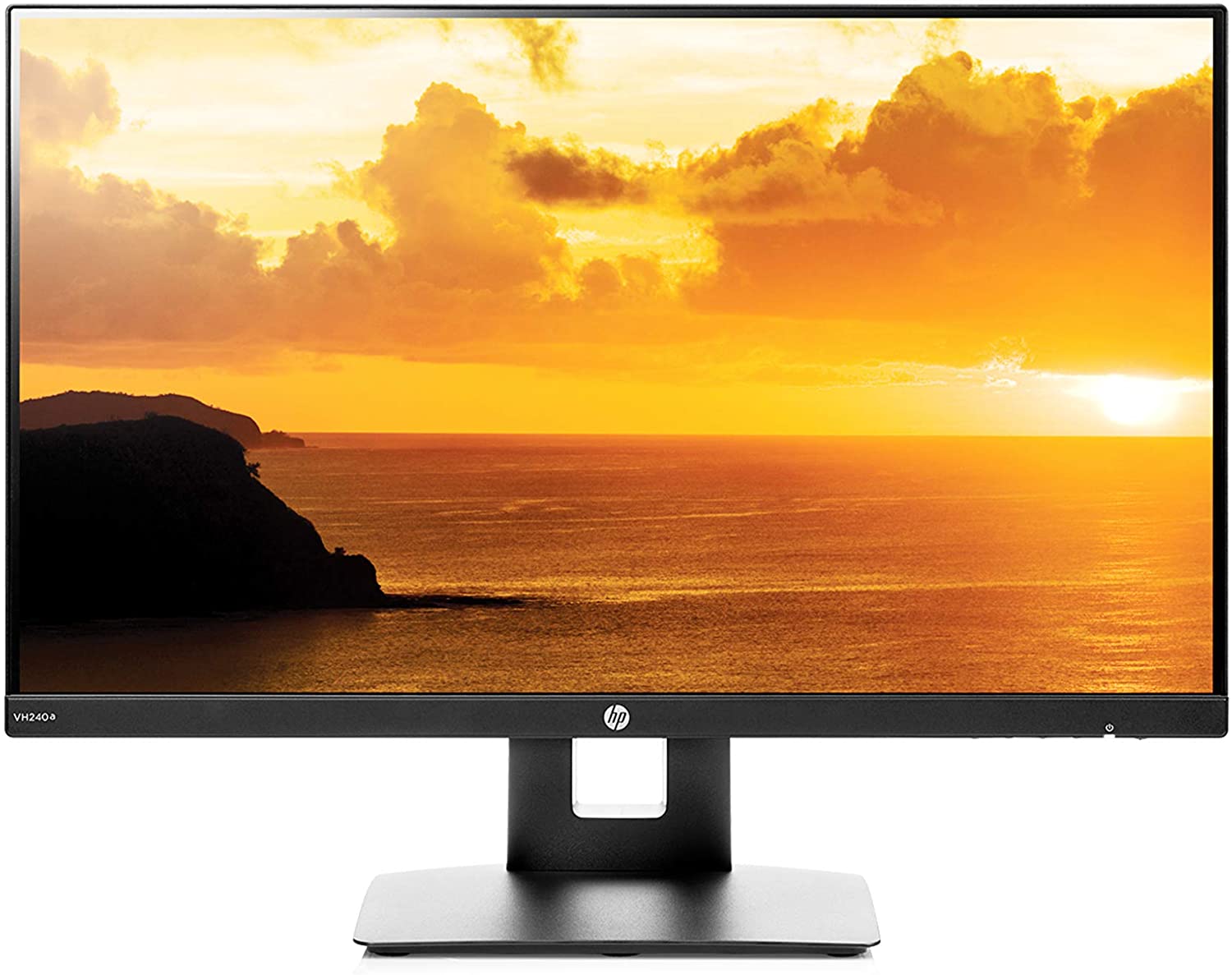 An All-Purpose Frameless Monitor That Gets You Through Everyday Tasks

We start today’s HP VH240a review by stating the intended purpose of this general-purpose monitor.

The HP VH240a is a 24-inch display that you can use for your daily computing tasks. Can this sleek, futuristic monitor also meet the demand for resource-intensive applications? Let’s find out.

HP VH240a review: Inside the box

This 24-inch monitor ships with every accessory you would need to install and operate it. It comes with a power cable, a power brick, an HDMI cable, an auxiliary cable, stand components, and a CD with graphics drivers. It also comes with a user manual and the screws you’ll need to assemble the stand.

The monitor may or may not come with a VGA cable.

The HP VH240a catches the eye. Maybe it’s the barely-there bezels that are only 1.6mm wide on three sides. It could be the contrast from the thicker bottom bezel and the bulky stand that supports the screen. Whatever it is, this 24-inch screen is sure to be a commanding presence on your workstation.

The next section of this HP VH240a review takes us through the design and build of the monitor.

The sturdy base of the HPVH240a stand belies its versatility and overall awesomeness. The stand will occupy a nine square-inch footprint on your workspace, but it offers a full range of motion.

You can adjust the height of the stand by up to five inches. Better still, the stand allows for full swivel and tilt up to 30 degrees.  It also allows you to rotate the monitor to portrait mode, which is useful for coding and other applications that require a long display. You could say that the stand is a major selling point of this budget monitor.

You’ll need to assemble the stand, an easy task that only takes a minute, or five. The ease of installation has a lot to do with the type of screws that come with the monitor. These screws have clips that serve as inbuilt screwdrivers. Next, you’ll need to attach the stand to the monitor itself. The back of the monitor has notched clips that allow you to secure the stand’s mounting plate.

There’s a VESA wall mount pattern located right where the stand connects to the back of the monitor. If you want the monitor’s sleek design without the bulky stand, you should consider mounting it.

[Read what others are saying about this monitor]

Being a budget monitor, the HP VH240a has a limited selection of ports. The back of the monitor houses a trio of downward-facing ports, namely:

They may not be a lot, but these inputs will meet your basic connectivity needs. The back of the monitor also has a set of controls that allow you to adjust the on-screen settings. Included in these controls is the screen’s power button.

Picture quality is largely dependent on two factors:  The type of hardware that goes into a monitor and how well the designers of the device harness this hardware. So before we go into the performance of the HP VH240a, let’s see what we’re working with.

For a budget monitor, the VH240a has impressive parts. The display is an IPS panel with 1080p resolution and a native refresh rate of 60 frames per second. Here is how the monitor performs:

Each pixel in the HP VH240a has its pick of colors from the sRGB color gamut available to the panel. For a 1080p display, the palette is enough to allow for fairly accurate color reproduction. The result is vivid, lifelike pictures with saturated colors that resemble nature.

Right out of the box, the presets are great and the colors are accurate. There’s little need for further calibration; not on the monitor and not on your O.S.

The monitor has a peak brightness of 250 nits, which is extremely impressive for a 24-inch budget monitor.

However, the screen can only manage a minimum black level of 0.25 nits. It may not be the deepest black you’ll ever see on a monitor, but it’s enough to create a stark contrast between the darkest and the most brightly lit colors.

IPS panels offer wide viewing angles that allow for unchanging color, contrast and brightness at all angles. The VH240a benefits from its IPS panel, meaning that you’ll be able to use the screen even when seated beside it.

60 frames per second is the standard refresh rate for a large percentage of TVs and monitors, including the HP VH240a. As such, the monitor will try to hold its own against whatever your PC throws at it.

Expect smooth motion as you watch an action flick or the big game. The VH240a will render fast-paced video with no noticeable screen tearing or motion blur. It will even allow you to perform basic image and video editing tasks without hassle. The story is a bit different with video games, though.

An input lag of 12 milliseconds puts the monitor’s reaction time in the same range as high-performance gaming monitors, which is good. That said, the 5ms grey to grey response time translates into at least 15ms effective response time. The result is motion blur and ghosting during fast-action gameplay.

Another drawback is the monitor’s lack of AMD FreeSync support, a feature that allows your GPU to implement a variable refresh rate. This means that your gaming gear will need to work extra hard to adjust the refresh rate of your favorite games. The result is the possibility of screen tearing during gameplay.

A monitor is not an alternative for a regular TV, so don’t expect anything resembling passable sound from the HP VH240a. It has a pair of two-watt speakers that deliver tinny audio. It’s a good thing that HP made the effort, but you’ll need external audio devices.

The point of this HP VH240a review is to help you decide if you should buy this monitor. Here’s the answer. If you need the monitor for daily use, then go for it. The picture quality surpasses what you pay for the monitor.

Then there are the people who push their graphics cards to the limit with demanding gameplay. Such people should spend a little extra for a monitor that can keep up with the most intense games. Read more about this monitor.