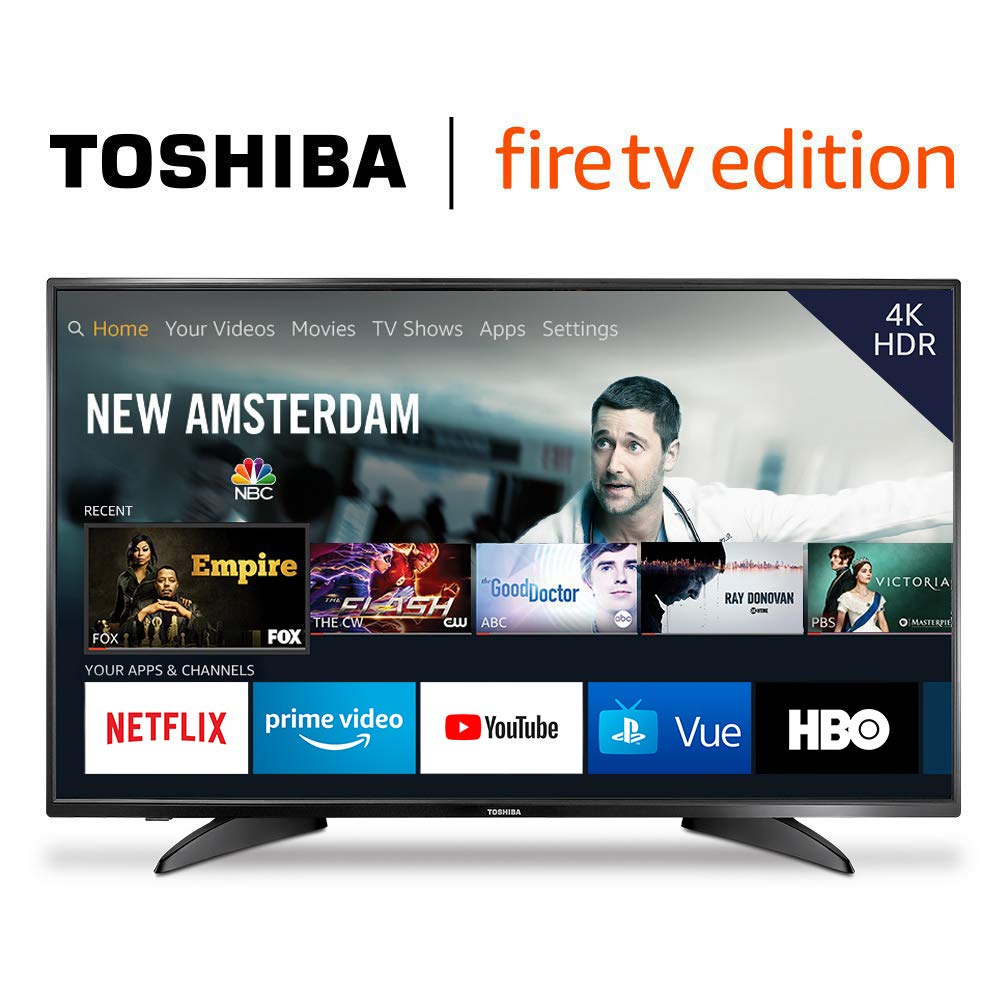 It didn’t take long into our Toshiba 43LF621U19 43-inch 4K Ultra HD Smart LED HDR TV review before we realized it’s one of the most impressive cheap 43-Inch TVs we have ever reviewed. It’s one of those electronic devices that remind you to never judge a book by its cover.

The exterior of the 43LF621U19 is rather plain, with a plastic bezel surrounding the screen that is just as ordinary. The infrared receiver that receives input from the remote is located at the lower right corner of the front area.

It comes with two plastic TV stands that look just like what you would find when you take a close look at any budget TV. It a very stable stand, but it won’t impress anyone. It gets the job done, which is what matters.

The Toshiba 43LF621U19 43-inch 4K Ultra HD Smart LED HDR TV comes with an Amazon Fire TV remote that is somewhat similar to what comes with Fire TV streamers. It comes with three menu buttons that are located above the navigation pad and three playback buttons below. At the top of the remote, you’ll find the microphone and power buttons.

It also comes with a live TV button, volume rocker, mute button and dedicated buttons for popular streaming services like PlayStation, Netflix, HBO, or Amazon Prime Video. The remote communicates with the TV via Bluetooth and infrared signals.

[Read what others are saying about this Television]

This cheap 43 inch TV is designed to allow you to effortless use your Amazon account for renting, buying or downloading media. You do not need to have an Amazon account – or any other Amazon services – to use the Toshiba 43LF621U19 43-inch 4K Ultra HD Smart LED HDR TV, but it gives you access to a wide range of media which is delivered directly to your Smart TV.

You can also effortless stream from any other streaming services like Hulu or HBO. During our Toshiba 43LF621U19 43-inch 4K Ultra HD Smart LED HDR TV review, we noticed it also comes with a YouTube app, but we were never able to get it to work unless we opened up the site using the Firefox web browser that comes with this Smart TV.

If you’re into fancy tech, you will be happy to know this TV accepts voice commands. You simply push the microphone button and say a command. You can also connect the TV to Amazon Echo so you can give commands without having to push any buttons.

The capabilities of the voice assistant could not be more impressive. You can tell it to search for your favorite show, ask for information like the weather or how close the nearest watch repair shop is. You can also control media playback with voice commands. It gives a whole new meaning to relaxing and watching TV. Need to change the channel? No need to reach forward to grab the remote. That’s way too much work! Just tell Alexa to do whatever you want.

The Toshiba 43LF621U19 43-inch 4K Ultra HD Smart LED HDR TV has an above-average peak brightness of 352.8cd/m2, a not so impressive 0.2cd/m2 black level, and dismal 1,764: 1 contrast ratio. If you’re not sure what these numbers convey, it means this TV produces balanced, clear pictures, but it’s not going to be a life-changing experience or anything of the sort.

A TVs input lag is how long it takes for the picture to update after it gets a signal. While watching movies, the input lag on this television is quite poor at 70.6ms. It does much better when switched to game mode at 40.2ms. However, if you are into video games, there are other TVs that are similarly priced that give your much better input lag like the 50-inch Element Roku TV and TCL 55-inch Smart TV.

This television is great for anyone who is looking for an economical way to dive into the world of smart TVs and all that fancy stuff. The picture quality is good for watching movies, streams or live TV. Not so much for gaming.

You get to give voice commands to Alexa, you can use all the major media apps and enjoy all the functionality of a smart TV. If you are one of those dinosaurs who are still trying to figure out why all the kids are so pumped about smart TVs, this cheap 43 inch TV is for you. Read what owners of this TV have to say.